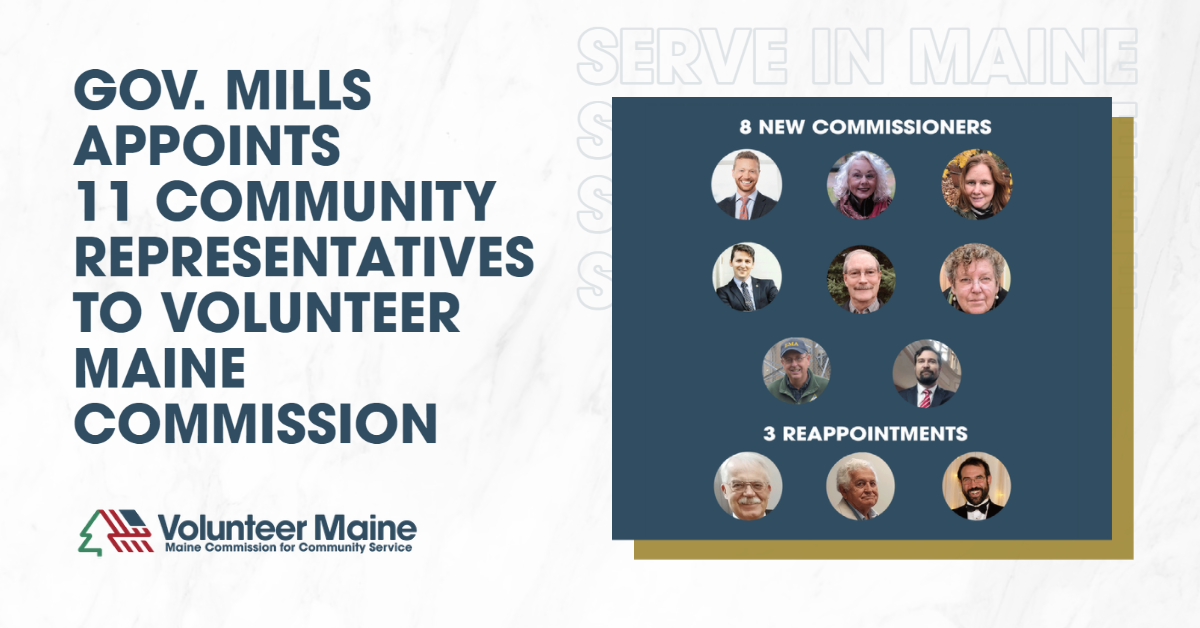 The Commissioners are a diverse, bipartisan group of citizens, actively engaged in community service, and represent every region of the state. Terms of service are three years with an option for reappointment. Commissioners elect officers from their membership and the officers serve two-year terms. The seats on the board are designated in statute such that each person represents at least one facet of the community volunteer service sector.

Ryan C. Almy of South Portland: Almy, an associate attorney with Bernstein Shur, has been appointed to the Volunteer Maine Commission as a representative of the business community. Almy has previously served as an AmeriCorps VISTA for the Volunteer Lawyer's Project.

Susan Asselin Hawthorne of Sanford: Hawthorne, volunteer and internship director at Sweetser, has been appointed as an individual with expertise in the education, training and development needs of youth, particularly disadvantaged youth.

Stacie Haines of Augusta: Haines, the development director at Maine Conservation Voters, has been appointed as an expert in the delivery of environmental services to communities and persons. Haines has also served as a member of the Peace Corps in West Africa.

Zachary W. Maher of Poland: Maher, the town manager of Mechanic Falls, serves as a representative of local government. Maher has also served as an AmeriCorps VISTA for the University of Maine 4H Camp in Bryant Pond as well as Mahoosuc Arts Council.

Robert Meinders of Benedicta: Meinders has been appointed as a representative of a National Service program. He currently sits on the Aroostook Agency on Aging Board as well as the agency's Retired and Senior Volunteer Program (RSVP) Advisory Committee. RSVP is one of the three branches that make up AmeriCorps Seniors, formerly known as Senior Corps.

Pamela M. Proulx-Curry of Old Town: Proulx-Curry, an academic support and credentialing specialist at United Technologies Center, has been appointed as a representative of the State's volunteer community.

Dale R. Rowley of Winterport: Rowley, the emergency management director for Waldo County, has been appointed as a representative of a local labor organization.

Edward Barrett of Lewiston: Barrett, who recently retired as city administrator of the City of Lewiston, serves as an expert in the delivery of human services to communities and people. He has served the Commission since 2014, and is the current chair of the Commission's Grants Task Force. Barrett previously served as Commission Vice Chair from 2017-19.

Peter Doak of Columbia Falls: Doak, retired U.S. Army and a retired superintendent of schools, has been re-appointed as a representative of out-of-school or at-risk youth. Doak has served the Commission since 2018.

Luke Shorty of Winthrop: Shorty, the executive director of Lee Academy, has been reappointed as an expert in the delivery of environmental services to communities and people. The chair of the Commission's Financial Oversight Task Force, Shorty has served the Commission since 2018.

Volunteer Maine, the state service commission, builds capacity and sustainability in Maine's volunteer sector by funding service programs, developing volunteer managers and service-learning practitioners, raising awareness of the scope and the impact of the volunteer sector, and encouraging an ethic of service. On Oct. 16, 2019, the Maine Commission for Community Service adopted the public identity Volunteer Maine.